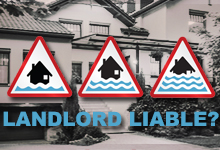 A recent High Court decision dealing with the tragic drowning of a toddler highlights once again the legal dangers faced by property owners who let out accommodation to the public.

This particular case related specifically to a Holiday Let on a guest farm and a natural disaster in the form of a flood, but of course any loss however caused could lead to your visitors/guests suing you.

And weather-related disasters – think storms, floods, wildfires and the like – will almost certainly increase in both frequency and intensity if climate change predictions hold true.

A “freak” flood and a tragic drowning

Most important of all, take professional advice specific to your circumstances!