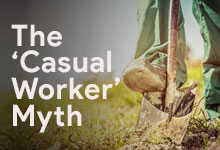 Employees in South Africa enjoy strong protections under a raft of laws such as the Basic Conditions of Employment Act (BCEA), the Labour Relations Act (LRA) and the Employment Equity Act (EEA).

Failure to comply with these Acts, whilst perhaps tempting to many employers struggling financially in these hard times, is not only unfair to employees (many of whom are in equally dire straits), but also an extremely risky business from a legal perspective. The CCMA (Commission for Conciliation, Mediation and Arbitration) and our courts take a dim view of employers flouting these laws, and offenders will pay heavily for doing so.

So, what is a “casual worker”?

A commonly held and dangerous myth is that you don’t have to worry about these laws when employing “casual workers”. That is perhaps a hangover from the pre-1997 definition of “casual labourers” as those who worked for 3 days or less per week.

However, that definition fell away with amendments to the BCEA in 1997, since when we have had no defined concept of “casual worker” or “casual employee”. What counts now is that employees who work for you for less than 24 hours per month are excluded from core BCEA protections – those relating to contracts, hours of work, overtime pay, leave, sick leave, termination and so on (the prohibitions against employment of children and forced labour still apply).

There is nothing to stop you using terms like “casual employee” or “casual worker” but bear in mind that they have no legal effect – what counts is that anyone working for you for 24 hours or more per month, no matter how you refer to them, falls under the BCEA’s provisions.

What about independent contractors and excluded employees?