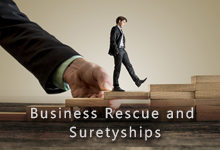 In these hard times of pandemic and economically destructive unrest, an unfortunate number of businesses face collapse, and many will opt for the “first aid for companies” option of business rescue.

Creditors coming out of that process with a shortfall (only the luckiest creditors are likely to emerge with full settlement) will naturally look to any personal suretyships they hold to cover that shortfall.

A recent SCA (Supreme Court of Appeal) decision has brought welcome clarity to the question of whether – and in what circumstances – such personal suretyships will survive the business rescue process.

Both directors and creditors need to understand the outcome, and to act accordingly.

Heed these lessons from the judgment!

The SCA in its judgment undertook a comprehensive interpretation of the terms of the deed of suretyship, of the business rescue plan, and of the relevant legislation. Although the detail will be of more interest to lawyers and academics than it will be to the average director or creditor, it did bring welcome clarity to an issue of great practical importance, and the valuable lessons therein should be heeded –

Directors: As always, think twice before signing any personal suretyship, and if you absolutely have no alternative, at least understand fully what you are letting yourself in for both legally and practically. Equally, ensure that the business rescue plan lets you fully off the hook as regards any possible personal liability; you may be advised to go further and have a separate release agreement with any creditor/s holding your surety. Although not directly relevant to this article, think also of managing any risk of personal liability beyond suretyship, such as allegations of reckless trading and the like.

Creditors: You on the other hand should always try for watertight and upfront suretyships from directors and others with attachable assets (again not directly relevant to this article, but also take whatever security you can over company assets such as debtors, fixed property etc). And when it comes to the business rescue plan, make sure that it leaves your claim against sureties unaffected.

Upfront professional advice and assistance is a real no-brainer here!