7,000 people have already been arrested for not wearing masks and most of them now have criminal records” (Police Minister Bheki Cele in mid-January) 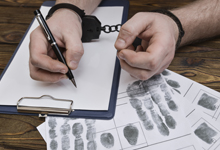 We all know that wearing a face mask is the right and the safe thing to do, but it is also a legal requirement – and it’s one that you really don’t want to breach.

Firstly, can you be arrested for not wearing a mask?

The short answer is yes, the amended Disaster Management Act Regulations providing that –

You could end up with a criminal record, and that’s real trouble

You can of course elect to go to court to fight the charge, but often you will also be given the alternative of paying an “admission of guilt” fine.

It will be a tempting offer at the time but be careful – paying a fine is one thing but if you end up with a criminal record (an entry in the SAPS Criminal Record Centre database) you will regret it. Imagine for example a scenario where you apply for a job, or a travel visa, or a firearms licence, or for credit (such as a home loan). And suddenly up pops your long-forgotten criminal record, a nasty surprise at the worst possible time.

Plans to change the law so that only some admission of guilt fines will result in a criminal record have so far come to nought. So as the law stands you will end up with a “deemed” conviction and sentence – and thus a record – if you are arrested and your fingerprints are taken. Which is exactly what the Minister says will happen to you.

And once you have a criminal record, it’s not at all easy to get rid of it.

Three ways you can try to remove your criminal record

The bottom line – wear your mask, and don’t admit guilt without legal advice!